TORONTO, CANADA, October 22, 2019 — Election nights have become one of TV’s biggest live events, so to maximize engagement and excitement during last night’s Canadian 2019 federal election night coverage, the Canadian Broadcasting Corporation (CBC) built the country’s most technologically advanced live broadcast studio, where nearly every visible surface is an LED display — including the floor. 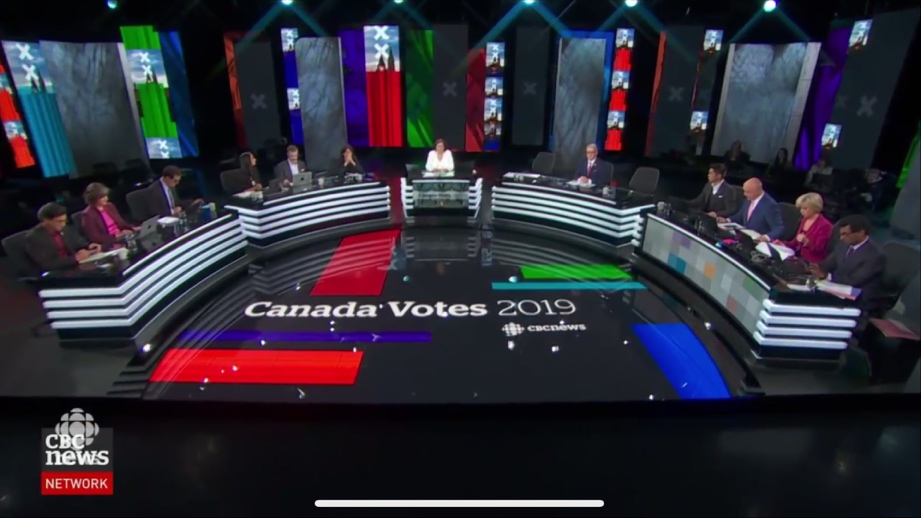 According to David Weatherhead, President & CEO of APG Media Group, the high-pressure election night environment required that every facet of the studio’s design, technology and operation be perfect.

“In this situation, there’s only one chance to get it right,” Weatherhead explained. “Based on APG’s extensive product catalog, design experience and technical knowledge, the CBC trusted us to specify the absolute best, most reliable technologies to deliver an election night broadcast unlike any other in Canada’s history. The immersive 360-degree studio offered endless opportunities to display and share information and graphics to grab the attention of modern viewers.” 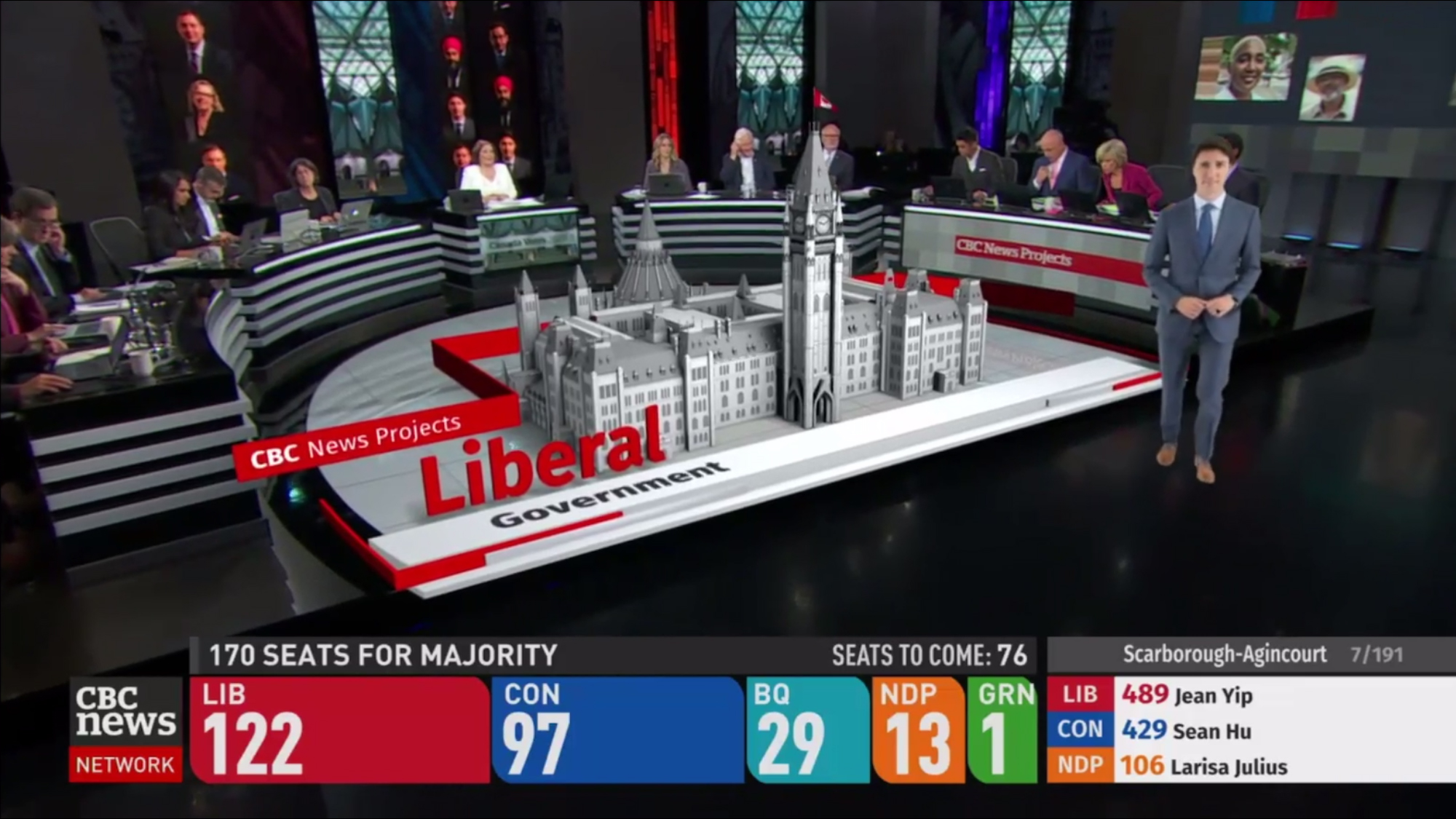 As CBC required the anchor desks to have LED displays built into them, APG supplied new 1.5mm HyperPixel LED displays, so the higher resolution would ensure that up close camera shots would have no moire effect. Furthermore, the desk LED was curved at 5 degrees and the HyperPixel product has a built-in mechanism to ensure a consistent curve is achieved. A 4.9’ wide by 1.6’ tall display was installed on the front of the guest table, and a 3.25’ wide by 1.6’ tall display for the front of the presenters’ table.

To top off the visual spectacle, the CBC asked APG to design an LED floor for the open-floor-plan studio. APG met this challenge with a custom-designed, arch-shaped LED display comprising 66 additional LED panels with a 4.76mm pixel pitch. The resulting floor resolution is full HD.

“The CBC knew what they wanted,” said Weatherhead, “so our job was to give them the right technology and tools to make it all work and look great on screen. Anybody can provide a video wall, but APG brings a wealth of experience and product knowledge that’s necessary to implement the best solution for flawless on-camera presentations. In situations where there is no room for error, choosing the right technology providers and designers can be the difference between success and failure.”

Weatherhead explained that the Hyper Pixel LED technology was chosen because of its excellent on-camera appearance, versus some other products that exhibit artifacts and distortions when on-camera. The Hyper Pixel’s superior broadcast capabilities include a faster refresh rate and better off-axis color accuracy than many competing technologies. 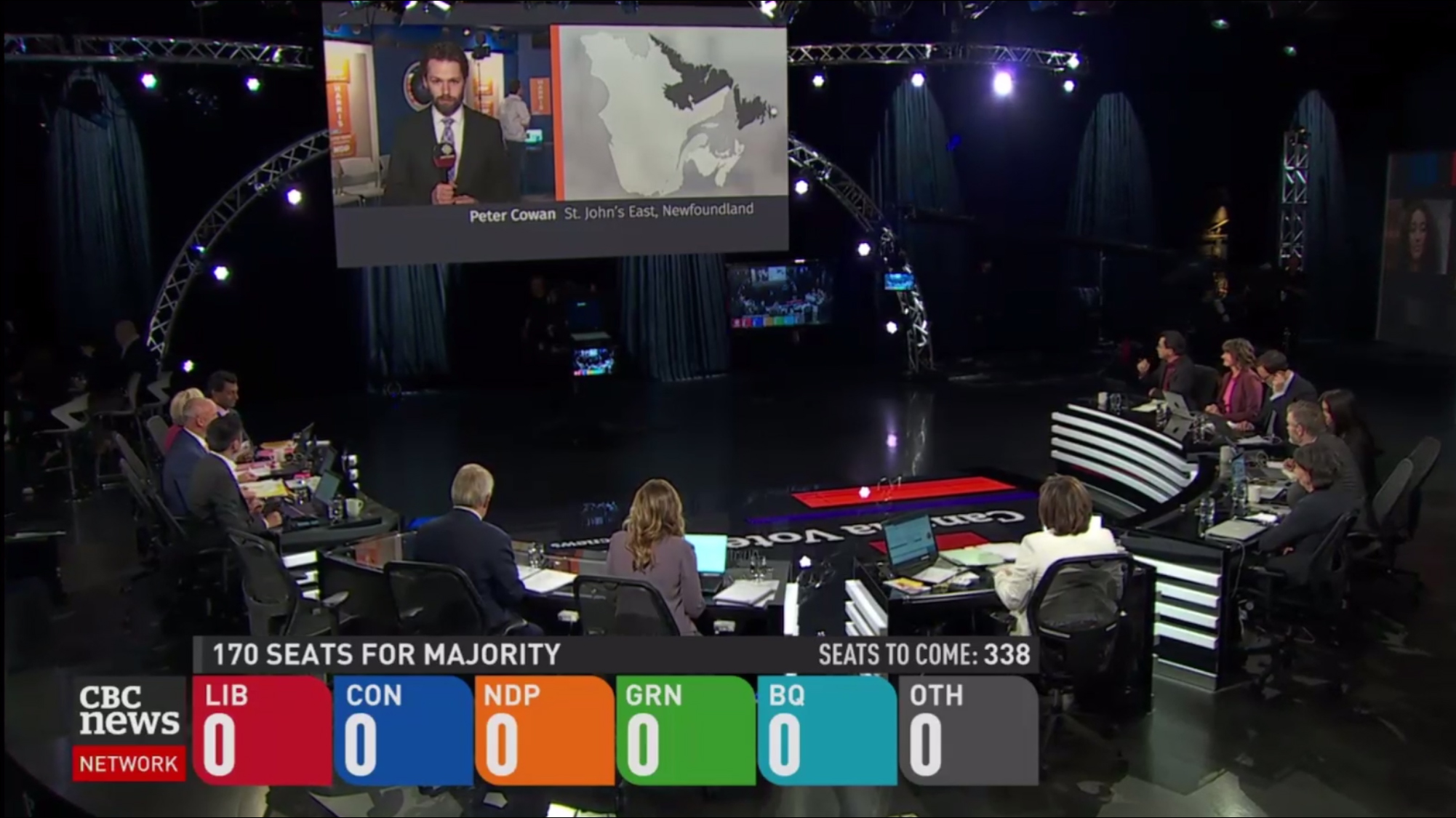 “This set ushered in a new era for Canadian broadcasters,” David Weatherhead concluded. “The immersive 360 space, which includes the first LED floor in a Canadian broadcast studio and curved 1.5mm LED, offers countless ways for the program to show information and display compelling graphics that differentiated its election night coverage from competing networks.”

With so much digital screen real estate, the studio had a variety of options for displaying all its content. The “Remote Video Wall” presented live feeds for content such as street views and correspondent commentary, while the “Election Results Wall” displayed constantly updating vote tallies and poll results. Combined with the dazzling creative visuals shown on the LED towers, every moment on stage was framed by bright, exciting content.

APG said that a variety of video processors were used to feed all of the different aspect ratios and content for the various LED displays. The CBC designed all the content and pixel mapped it to fit each display’s unique aspect ratio. The studio was designed and built exclusively for Canada’s 2019 federal election night, and was dismantled immediately following the close of the election broadcast.

The CBC’s forward-thinking temporary studio provides a fantastic case study for how innovative media companies can maximize the return and viewership of special events with new technologies that can be rented to create purpose-built, mission critical studios.